Check Me Out On These Sites:

Check out my OFFICIAL YOU TUBE CHANNEL: HERE

I have, for as long as I can remember, have had a creative / artistic side that needed to get out.  Having experienced many things in my life which caused me to gain a rather different perspective on things than my peers I began to express myself through poetry.  In the beginning there were three of us going by the name of Disobedience, we were young, angry (especially me) and determined to make any sort of music we could on that dirt floor in the basement practice area we jammed in.

After some time things just kind of tapered off we got jobs, finished school and kind of moved on with life.  However I continued to create and develop my style as a solo artist going first under the name of King9ine.  This name was taken up by another band calling themselves King Nine (which I also used this variant too long ago) but just as well I needed to start a new chapter in my life after a period of very tough emotional times which came to a head in August 2013.

I was in a slump, possibly the lowest point in my life and I sat down and wrote a poem called August Will Decay.  That is how I felt, that during that terrible month of August I would decay. (My emotional state anyway) And I guess to a certain extent it did.  I was forever changed by the events that followed and I have come to realize that I will only ever have this one life to live and with that life I can choose to sit around writing sad poems which would turn into the occasional song or I can really try and put some effort into showing the world who I am, what I am made of, what I have been through, my hopes, thoughts, beliefs, and failures through music which I hope some people can relate to.

I am living currently in this new chapter of my life where I have decided not only will I make this effort to show people my music but I will make it an obsession to achieve.  I have been sitting on dozens of song for the last 15 years that I have unearthed and polished up the best I can and I have released some EP’s which showcase some old songs but also some new songs.

I am going to keep making my heart speak through music and this website is just another effort in this chapter in my life to make my voice heard.  And while I could never thank the people in my life that have caused me endless pain I can at least say that they have inspired me.  Driven me.  And pushed me to further succeed beyond, hopefully what I even think is possible.

My albums that are for sale can be purchased
——>HERE<——-

August Will Decay is an honest expression of raw emotion good bad or indifferent we all have emotions I am not afraid to voice mine. 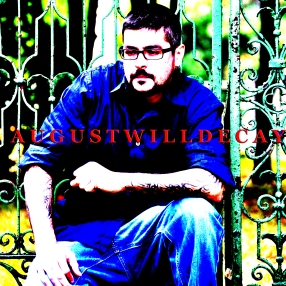 I am happy to announce that I have 202 likes on Facebook.  I appreciate every one and hope that there will be more as more and more people get to know August Will Decay.  Its been a long tough year for me so far but I look forward to a great creative winter with my new album out by the spring / summer.  Thank you again to all of my supporters. 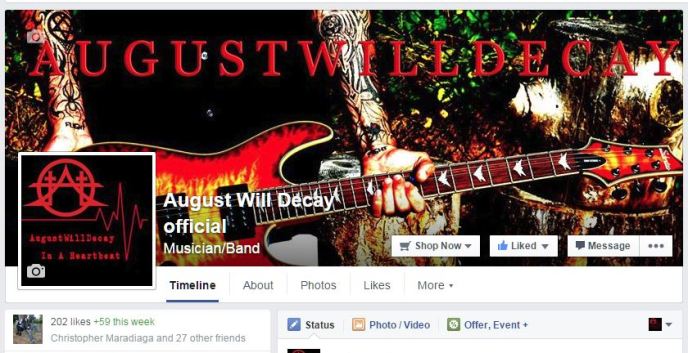 P L E A S E F O L L O W M Y B L O G
Stay up to date with, music, poems, artwork, photography, and my personal blog posts.
Thank you so much EVERYONE for all of your support!